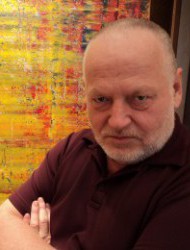 Aivars Kisnics was born on 16th of November, 1955 in Madona, Latvia. Since 1956, he has been living in Liepaja. His mother was a dressmaker, his father was a technician on a ship. After the graduation of the school he joined a Maritime College in Liepaja. In 1975 he got the profession of a navigator. He developed his career further into the captain of a fishing ship in 1980 and the main working area was the Baltic Sea. In 1999, he retired and worked as a captain on a pilot boat in the port of Liepaja in Latvia.

»I was interested in art since school time – did participate in drawing as well as photography competitions and was awarded with state-wide certificates. Painting with oil on canvas I began around 2005.