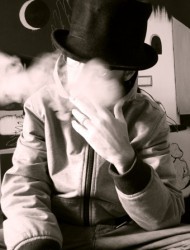 Born in 1984, Orlando R. Valdivieso comes from a family of artists from Colombia. Starting from a self-taught background of experimentation more than a decade ago: his work doesn’t simply depict a moment in time and space, but also the mysterious accidental ways of how complexity in intellect lies in the simplicity of gesture. Or according to the expression: the whole meaning lies within the shell of a cracked nut. And how during the actual process it becomes an attempt to capture the evasive nature of reality (by dripping the paint or drip painting) in the poetry of failure. And in the intersection between reason and instinct, where mistakes are aloud to happen, his work speaks through the body not about the body itself, and talks about aspirations and failures, weaknesses and strengths, absence and excess, rights achieved and rights lost along the way. The resulting works walk a fine line between figurativism and abstraction, irony and enigma, process and result. And by allowing impulsive strokes and drips to occur, even to fail, everything that happens remains; nothing is eliminated and there is no chance to repeat, rewind or do it the same again. A technique developed within the Abstract Expressionist tradition and furthermore turned into figurativism, however suggesting a Pollock-rooted randomness. Rich with primitive and modern styles, high and low-brow art, as long as appealing to the senses, which navigates a multitude of subjects, asserting or deserting the horror and sometimes naivety of the chaotic issues of our time; ruled by preconceptions, shallowness and the intransigence at the constant flow of images and information of the post-digital era.